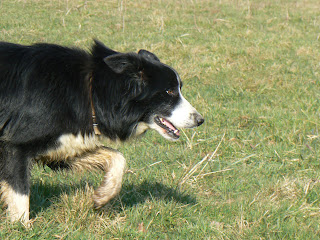 Atoll died this week. It's been quite a shock for us. He was 7 years old, but lately he was suffering from severe athritis. He would run seemingly effordless when working but would limp when walking. He had taken to sleeping under cars in the shade. He got rolled over by a car under which he was napping. It did not kill him but we had to call the vet to put him out off his misery. He was a working dog not a pet, so we had a different relationship with him, but not less intense. We miss him emotionally, but we also miss him in our work. We needed him on the farm, he had his place.
Posted by Ferme du Jointout at 12:42